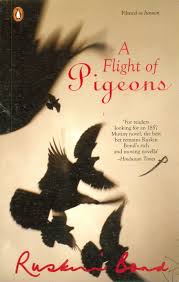 A Flight of Pigeons is a Novella by Ruskin Bond. Set in the backdrop of the 1857 uprising, the story traces the lives of a British family as their city is taken over by Indian rebels. True to his style he spins a simple yet engaging tale of humanity, love and courage weaving it beautifully with the socio political upheaval the country was witnessing.

The story is about the Labadoor family of Shahjahanpur, who are forced to flee their home as the Indian rebels kill Mr. Labadoor and burn down their house. Mariam flees to the house of their trusted friend Lala Ramjimal along with her daughter, her sister, niece, nephew and her mother. They take up Muslim names to protect themselves but are soon discovered by one of the rebels Javed Khan. He takes Mariam, her daughter Ruth or Khurshid and Ruth’s grandmother and her cousin to his house, where he expresses a desire to marry Ruth. Mariam however is able to delay her decision and in this she is helped by Javed’s wife, the beautiful Qabil and other female relatives. While Qabil helps them to save her marriage, Mariam impresses the other women in the household with her quick wit and her various talents.

Though the story revolves around Ruth, the narrator of the story, who Javed Khan is obsessed with, it is Mariam who wins your heart just like she wins the hearts of Javed’s extended family.  She is a quick witted, brave woman, much like a tigress protecting her cubs.

‘If you would take my daughter’s life, take mine before hers, I beg of you by the sword to Ali!’ Her eyes were bloodshot, starting out of her sockets, and she presented a magnificent and quite terrifying sight. I think she frightened me even more than the man with the raised sword…’

The tides turn as the British recapture Delhi and the families flee Shahjahanpur fearing a backlash. Despite Mariam and her daughter being firangansthe women help them to flee too so they can reach Mariam’s brother.

As they hide in a vacant house while fleeing Shahjahanpur, Javed comes to see Ruth at night. While Marian refuses to let him see her ‘but impelled by some odd impulse, I stepped forward into the light and stood before Javed Khan. He gazed at me in silence for about a minute, and for the first time I did not take my eyes away from his’

While it’s difficult to say if Ruth was in love with him or not, but your heart does go out at this point to the otherwise brutal Javed Khan. May be he truly loved her and hence waited patiently for her mother to agree to his proposal instead of using force.

It’s a beautiful read and will fill you with compassion. A war forces you to take sides, whether you like it or not, but there always a handful who see people for who they are and not on which side they are. It is a story which re-establishes your faith in humanity and a very important lesson in today’s times. 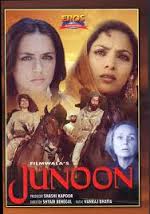 I also faintly recall that the book was made into a moviecalled Junoon, starring Shashi Kapoor and his wife Jennifer. I am definitely going to give it another watch.

3 Replies to “Flight for life, flight to freedom – A Flight of Pigeons”