Remember this absolutely endearing song from Jungle book? The animated TV series on Doordarshan [Yes, I am that old ;-)] about the lovable Mowgli and his friends, Baloo the bear, Bagheera the panther, Sher Khan the tiger [Ok, so the last one wasn’t a friend]. While I have very faint memories of the TV series, the song is a personal favourite. I remember more of the story from the book that I read afterwards, though that is a long time back too.

Published as a series in a magazine in 1893-94, the Jungle Book stories were written by Rudyard Kipling, apparently, for his daughter. And the over the years they have captured the imagination of so many children, I being one of them. I was undoubtedly very excited when Disney released their movie last week in India. And what was amazing was the fact that the theatre had more adults than children. And what a movie it turned out to be and no, I am not talking about the direction or the adapted screenplay or the dialogues or the special effects [which without a doubt were just bang on]. For me not only was it a walk down the memory lane but as I saw it from the lens of an adult, it had an all new meaning. It taught me some much needed life lessons and re-affirmed my faith in Loyalty, Order, Justice and Unity!

How you ask? Then let me remind you of the Law of the Jungle:

Wash daily from nose tip to tail tip; drink deeply, but never too deep;
And remember the night is for hunting and forget not the day is for sleep.

The jackal may follow the tiger, but, cub, when thy whiskers are grown,
Remember the wolf is a hunter—go forth and get food of thy own.

Keep peace with the lords of the jungle, the tiger, the panther, the bear;
And trouble not Hathi the Silent, and mock not the boar in his lair.

When pack meets with pack in the jungle, and neither will go from the trail,
Lie down till the leaders have spoken; it may be fair words shall prevail.

When ye fight with a wolf of the pack ye must fight him alone and afar,
Lest others take part in the quarrel and the pack is diminished by war.

The lair of the wolf is his refuge, and where he has made him his home,
Not even the head wolf may enter, not even the council may come.

The lair of the wolf is his refuge, but where he has digged it too plain,
The council shall send him a message, and so he shall change it again.

If ye kill before midnight be silent and wake not the woods with your bay,
Lest ye frighten the deer from the crop and thy brothers go empty away.

Ye may kill for yourselves, and your mates, and your cubs as they need and ye can;
But kill not for pleasure of killing, and seven times never kill man.

If ye plunder his kill from a weaker, devour not all in thy pride,
Pack-right is the right of the meanest; so leave him the head and the hide.

The kill of the pack is the meat of the pack. Ye must eat where it lies;
And no one may carry away of that meat to his lair, or he dies.

The kill of the wolf is the meat of the wolf. He may do what he will,
But, till he is given permission, the pack may not eat of that kill.

Lair right is the right of the mother. From all of her years she may claim
One haunch of each kill for her litter, and none may deny her the same.

Cub right is the right of the yearling. From all of his pack he may claim
Full gorge when the killer has eaten; and none may refuse him the same.

Cave right is the right of the father, to hunt by himself for his own;
He is freed from all calls to the pack. He is judged by the council alone.

Because of his age and his cunning, because of his gripe and his paw,
In all that the law leaveth open the word of the head wolf is law.

Now these are the laws of the jungle, and many and mighty are they;
But the head and the hoof of the law and the haunch and the hump is—Obey!”

So go ahead watch the movie or read the book and make the cute little man-cub a part of your life. 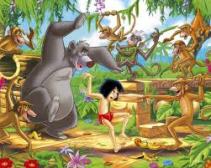 P.S -While people who know Hindi would agree that the first two lines of this post can have no literal translation, however it roughly translates to – The Jungle is abuzz with the news of a new flower which wears underpants. The flower in underpants is of course Mowgli. This song is as iconic as ‘The Bare Necessities’ from the animated Jungle book movie of the 1960s.

One Reply to “Jungle Book – Of nostalgia and life lessons”