‘Amidst fairytales and mythologies, amidst the dance of shadows on the lonely roof. Reindeers and greyhounds in black finger-shadows, by the wall. Whizzes of mosquitoes, a lone green spiral in smokes is their sole rescue. Amma would tell stories, by the shadow of the dark, rainy evenings….’

That’s how we are introduced to Manisha, the protagonist of Sinjini Sengupta’s debut novel, Elixir. A quite girl, growing up with her Baba and Amma, without a mother. Her mother, whom Baba and Amma had chosen over her, could not survive the childbirth and she was born; ‘A trespasser’ as the author puts it.

So Manisha grows up trying to justify her existence, longing for validation. As if she has to prove that she deserved this life, Uff…what a painful existence that would be for a young girl. Your heart goes out to Manisha. You cannot blame the people around her though, they love her, her Baba, her Amma, but you still feel for Manisha.  Even as Manisha grows up, gets a job, gets married, excels at work, she feels consumed by an emptiness. There are no explanations or attempts to explain why, why not, how….and yet you feel her anguish, loneliness.

Sinjini etches Manisha with the patience of a sculptor; Leisurely, line by line, fold by fold. Manisha permeates you and so when you see her spiraling into an abyss where she can no longer differentiate between reality and dreams, you cannot turn away from her and ask why? You oscillate from helplessness to hope like Manisha does. 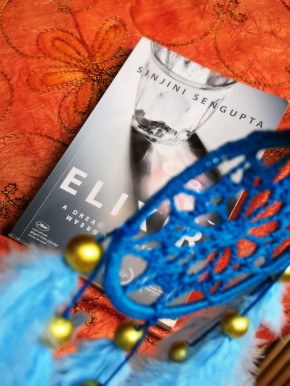 ‘The pictures stay with her like a torn thread of a trampoline net, hanging. Almost invisible, and yet she can crawl up by its edge…Like a trapeze player who now has a choice, to fall or to rise…or to rise in a fall’

Does Manisha rise in a fall or does she fall? I struggled to find an answer. Did Manisha need help? Or did she need validation? Would it have been any different if Amit was more compassionate? Would it have been different if her Amma was still there for her? There aren’t really any answers.  I wonder though why the author does not explicitly talk about Manisha’s mental health? Was it deliberate? Because isn’t that how we treat mental health…something never to be mentioned, to be spoken in hushed voices, never to be discussed.

Sinjini’s vivid imagery and her eye for detail, makes Elixir an engaging read. You feel highly invested in Manisha and her story. I love that she writes in small sentences, simple yet manages to move you. The detail with which she describes Manisha’s days, makes her loneliness all too palpable. I however wish I knew a little more about the other characters. For example I could not make sense of Amit’s indifference, why would he be so aloof? Or Manisha’s Baba, their relationship is a little fuzzy to me. These are mostly afterthoughts though, they do not take away from the story. Was the ending a little rushed? May be it was just me trying to get a little more of Manisha, may it was just me hoping that she makes it through….maybe she does eventually!

The book is inspired by a short film by the same name scripted by Sinjini. The film went on to be screened at Cannes and various other film festivals. Having read the book first….must say the book complements the movie well. Crisply scripted and well directed, the movie conveys a lot, well within 30 minutes, no mean task, especially with a subject as complicated as this one….and may I say I liked the movie’s open ending more.

The book is available in bookstores and online portals

The movie is available on Pickurflick.com